skip to main | skip to sidebar

This bottle could be the source of endless confusion as there is a vineyard by that name (owned by the same people?) in Chile that produces Malbec. This, however, is the Argentine version, from the Mendoza valley. It's a nice enough wine, with blackberry, cherry and a jammy chocolate flavor and an even aftertaste. But, to noone's surprise, surely, it's greatly overpriced at $9.99, being available for three dollars less in N.J. & N.Y.
Posted by Paul P Bernard at 4:50 AM No comments:

This southern Burgundian red has good black berry flavors but quite a lot of acidity along with pronounced tannins. There is something that goes vaguely wrong in the aftertaste. At $9.99 it's massively overpriced, being available for three dollars less in N.Y. and N.J.
Posted by Paul P Bernard at 4:57 AM No comments:

This white from northwestern Portugal is a somewhat atypical Vinho Verde. It has rather more bubbles than most and its peach and gooseberry elements make it a good deal less tart than one would have expected. For those who like a sweeter (but not sweet) wine. $9.99, which is a bit on the high side.
Posted by Paul P Bernard at 5:13 AM No comments:

We differed on this Galician white from the Rios Baixas. Unlike most wines from this region, it's aged for eight months in steel barrels, which produces a somewhat musty, yeasty character. While both of us appreciated the up front citrus and pineapple elements, my CDC thought she detected an underlying sweetness, while I thought it might be slightly over the hill. This might or might not be the case, but if you snag a good bottle at the sale price of $8.99, it's a real bargain.
Posted by Paul P Bernard at 4:34 AM No comments:

Anything but subtle, this red from the huge Australian combine displays strong black berry and cherry flavors and more than a hint of oak. But it's certainly a drinkable wine and the sale price of $4.99 will not break the bank. Will go well with red meats or pizza.
Posted by Paul P Bernard at 5:05 AM No comments:

Herdade do Peso Vinha do Monte 2008

This Portuguese red, an Alentejano, is a quite nice wine if allowed to breathe for an hour or so (else the tannins dominate in an unpleasant way). It combines blackberry and plum elements with a touch of spicy chocolate and doesn't break up at the finish. My guess is that a year or two in the bottle will improve it further. Unfortunately, once again the PA price of $8.99 is off the wall, it's available at any number of places in NJ for two dollars less.
Posted by Paul P Bernard at 5:40 AM No comments:

This very new Australian white has surprisingly pronounced melon and citrus flavors for what is a mass production wine. While not competing with the best of the variety it is eminently drinkable and should certainly be snapped up at the present sale price of $4.99.
Posted by Paul P Bernard at 6:34 AM No comments:

This New Zealand Marlborough Valley has a very pale color, tastes of pineapple and citrus, with the former predominant, but lacks the newly mown grass zing at the finish which characterizes the best of the New Zealand Sauvignon Blancs. Still, it's a pleasant enough quaff, and at $8.99 it's attractively priced.
Posted by Paul P Bernard at 5:58 AM No comments:

I admit to a prejudice against roses, with the exception of a good Tavel. They are mostly too sweet for my palate. This Spanish Cuenca is no exception. The dominant taste is strawberry and there is no bite to counterbalance it. However, if you like a sweet wine, the liquidation price of $6.99 certainly makes it an attractive buy.
Posted by Paul P Bernard at 4:35 AM No comments:

Back from the bounding main

The wines offered in the all inclusive package on Sea Dream I were standard stuff, the Danzante Pinot Grigio, previously reviewed here, being a typical example. Among the reds our favorite was the Santa Rita Carmenere Reserva 2007, a Chilean red with a pleasing dark cherry element and soft tannins and hints of soft herbs at the finish. Available in PA for $11.99, but for as little as $8.99 elsewhere.

We also splurged on a Bouza Tempranillo/Tannat 2006. This Uruguayan red comes on with a delicate dark berry flavor, spiced with chocolate, and opens up very nicely when decanted. In imitation of Chateau Neuf du Pape,reflecting stones are placed underneath the wines to absorb heat during the day and keep the grapes warm at night. Some people complain that this results in overly harsh tannins, but we didn't find this to be the case. This is a superior wine, worth the PA price of $18.99.

In Spain, we sampled what is now the standard Parador red, the Melchior Crianza 2005, a Rioja. This is definitely on the light side for a Tempranillo and will go with most anything. Available in Spanish Hypermercados for roughly $8.00, but not in PA.

We tried two reds from Estremadura: A Privilegio de Romale Crianza 2006, a Tempranillo aged in oak for eight months, from the region of Badajoz. This struck us as at the same time especially silky and interestingly spicy. I would buy this wine again anytime. Roughly $10.00, not available in PA, but I certainly recommend it to the powers that be.

Another Tempranillo from Badajoz, The Basangus Crianza 2007, aged in oak for fourteen months, is a powerful wine, reasonably but not excessively heavy, with strong black berry flavors, medium tannins and a kicker of licorice. Goes extremely well with red meats, ca. $11.00, not available in PA.

We also had two very nice whites, a Fernandez de Pierola 2007 from the Rioja, a straw colored wine with white melon flavors, a little subdued in the finish. Roughly $9.00, not available in PA.

And,in Portugal, a Quinto de Azevedo 2008, a Vinho Verde made mostly from the Lureiro grape. Vinho Verdes used to be suspect, as in the cold, wet climate of northern Portugal they tended to be excessively acidic and were sugared to counterbalance this. But with modern methods of cultivation this weakness has been overcome and the wine under review has a very nice lemony flavor with enough of a white fruit element to banish any sourness and no sweetness whatsoever. There is just the merest hint of the bubbly element (the result of adding CO2), typical of the variety ,in this wine. Ca. $10.00, not available in PA.

Finally, back home, we opened a bottle of Olvena 2007, a blend of Tempranillo, Cabernet Sauvignon and Merlot from the Somontano in the foothills of the Spanish Pyrennees. With the proviso that it has to breathe for at least an hour, this is an excellent wine. It exhibits a nice blend of dark plum and chocolate flavors with a marked element of spices. For once the PA price of $9.99 compares very favorably with what is being asked elsewhere. I suggest you buy it.
Posted by Paul P Bernard at 6:17 AM No comments:

Paul P Bernard
I recently moved to PA, having lived for many years first in CO, then in IL. Like any wine lover with limited financial means is bound to be, I was appalled by what I found. The state controlled liquor authority in PA is a sinister joke. As with all bureaucracies with no bottom line, one finds uninformed, indifferent, and often surly personnel, and a seemingly endemic disability to bring the cash registers into accord with the advertised specials. If one then complains about being overcharged one is subjected to long delays and made to feel the whole thing is one's own fault. But, not enough, to heap injury upon insult, the price structure is ludicrous. The claim is that the mass purchasing power of a state agency passes on savings to the consumer, particularly with the "Chairman's Specials". Anyone can test the veracity of this claim by crossing over into NJ, where every single bottle on special in PA is routinely on offer for a quarter to a third less. In spite of these evident handicaps, I decided to see if it is possible to purchase a decent bottle in PA for under $10 ($12 for special occasions). It hasn't been easy, and this blog will be an ongoing report on my efforts.

I was born and grew up in Belgium. There, as in all of the francophone world, children, as soon as they were old enough to sit up at table to have their dinners (usually at midday) with the adults, were allowed a glass of wine. The thought behind this was that they should enter their turbulent teens already accustomed to alcohol and not treat it as yet another exciting discovery, to be abused with the ungovernable energy that the hormonal storms of those years produce. By and large, this premise was a sound one. The level of alcoholism in the French-speaking countries tends to be well below that of the Anglo-Saxon and Scandinavian ones, never mind the United States. To be sure, this datum can be challenged on a matter of definition: while there may be fewer binge drinkers who get raging drunk whenever they have access to alcohol, a goodly proportion of the working class, which habitually has a glass or two of wine with breakfast, is working on a mild buzz throughout the day. Still, the results are less deletirious: they function. At one point a Prime Minister of France, appropriately named Mendes-France, himself an anti alcohol crusader, launched an initiative to persuade the French to throw away their wine and drink milk instead. Needless to say, the project was still-born. The French consume as much wine as ever. The point I'm trying to make is that it seems to me that it is eminently possible to go through life enjoying one's wine without being seriously impaired in one's judgement or one's work level. In the old days in Europe one had the main meal of the day at noon, invariably following that up with a nap, so that when one returned to work one's mind was again clear. Nowadays dinner tends to be taken in the evenings, which means that one isn't really fit to do much serious work afterward, but I would argue, pace all you workoholics, that one's evenings should be devoted to less demanding and more congenial activities. I have enjoyed my evening wine throughout a long life, I've drunk some very good bottles and remember them fondly, and I would urge you to do the same.S 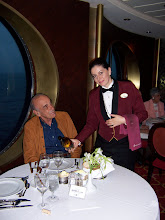